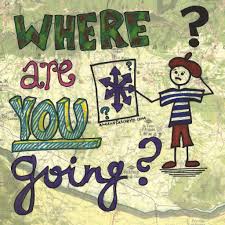 80% of the cabs in KL are stingy, dirty & with torn , breaking or already broken seats, and the rest 20% you can never catch. And like every evening, I hailed this shabby looking one going past, sat in after I made my usual don’t-i-deserve-something-better-to-place-my-ass-on face, and opened my mouth to explain to him where exactly I want this moving-piece-of-tin to land, is when he blurted “ I know where you want to go la!”

Was I Shocked? Yes of course, what do you think? I tried to recognize his face but couldn’t and before I could say something he announced in a typical indo-china-Malay accent [ typical of all people living here for more than 10 years], that he has taken me several times to my daughter’s play school, at the same hour “ You pick your douter la, from kindergartten la, near BSC..umm..I drop u so many time la”.

And this another fine day, during almost the same time, I called a cab and asked to take me to a nearby mall, when he almost took me to my daughter’s preschool and answered on my scream that he assumed am going to pick up my daughter as usual so he did not exactly care to hear where I wanted to go.

The more I hate the condition of the cabs here, the more it comes up to me. Reminds me of a funny incident, I walked up to a taxi stand and observed that there were 3 cabs already waiting , the first one being the worst of all, the second one relatively better and the third one bad again. So I sat on a bench, pretending I am not aiming to hire one, and waited for someone to come and take the first cab, by the so-called rule. Someone did come and took the first cab and without wasting a second, I stood up and waved for the second one, & he said No, please take the one behind! ….! & I was like…..!duh!

I so wish to buy a “my” car soon but that isn’t a legitimate dream unless I get a driver’s license. Yes!..that’s me!Hello..I am no alien, there are many Indians who have a license without knowing the D of driving and there are ones who drive all the time but don’t have a bloody license, and U guessed it, am from the later of the species. And I know am a real silly person to have driven all this while in India, Europe and even in KL during emergencies, but now with my daughter seated, I would never want her to see me landing in any kind of police trouble, so I quit. Getting a license is my next Things-to-do followed by Buying a not-so-shabby-piece-of-tin, and then no one should know where the hell I want to go!!

I am to you, what you are to me!! View all posts by Reema